Someone asked me to post more playgrounds on the Montreal-Toronto route, so here ya go!
Granted, it’s not that far out of Montreal (about 30 minutes) but you never know when you’re going to have a moment of panic at the beginning of your road trip, and need to pull over to check if you’ve remembered to pack Bubbles-the-Stuffed-Bear that the toddler can’t live without.
This playground is about 3 seconds off the highway at Exit 2, and Rue Principale is accessible from the east or west-bound lanes of the 401.

On our way to an event in the country, I happened to glance to the right just after getting off highway 401 and BOOM! a municipal playground tucked in behind the school. There was still snow on the ground, but we didn’t care. I’ve been up this road dozens of times and had never noticed the playground, maybe it’s the new play structures installed in 2014 that caught my eye. 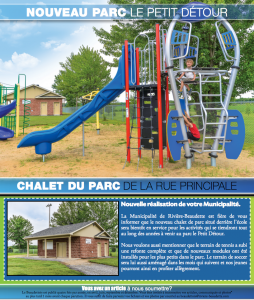 Leaving the car by the fence, the 7-year old and I wandered in and checked out the mixture of old and new equipment. There are a couple of new spring riders, some older swings (big and baby), and a whole row of seesaws. What interested us the most was the new climber from Quebec-based Jambette. The Rocket is a creative design with challenging ways to get up to the slide. There’s also a rope ladder and a climbing wall. In the wood chips surrounding the rocket is a “hang on!” spinner and a stand-alone twirly slide with metal rungs and corkscrews to climb.
While my older was was satisfied, there isn’t a whole lot to do here for toddlers.

In the same area is a new chalet with bathrooms (though I can’t tell you when they’re unlocked), tennis courts, baseball, and lots of room to run.

It’s like we missed the turn for Verdun, and ended up in something from Dr. Seuss’ imagination. This whole park with equipment from Playworld…