We received the fleece Ursus suit as a gift for our first one and it’s one of the few things that I kept after the “we’re only having one child!” purge.
Good thing, because along came his surprise brother and I pulled out the blue suit and used it all over again. Thin enough to be used in the car seat (the fleece won’t compress in a crash), it’s a great spring/fall outdoor outfit and you see it in a lot of our park photos on chilly days. When kid No 2 outgrew the first suit I splurged and bought him the next size up; what we call his “green bean suit”. I find it has a generous fit and though he just turned 3-years old he’s still wearing his 24 month suit.

We’re now on our third Toaster Suit (and had the Toaster Bunting suit when he was an infant), and this one is a super time-saver for winter mornings. We also have a two-piece snowsuit which comparatively, is a pain. Both the Toaster and Bunting have long zippers that go down to the knees, so putting in a squirming kiddo is relatively easy. Feet in, pull up, zip!
And bonus, they don’t get snow down their backs.
I’m hoping I can keep the little one in the Toaster suit until he’s about……15.

MEC apparel is a hot item on the second-hand circuit, so if you ever see one for sale, snap it up!

Two other wintertime favourites from MEC are the Toaster Booties and the Toasty Mitts. 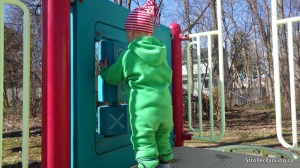 We’re on a quest to finish all of Ile Bizard’s parks! A few more to go… This is a small park with three different…