Wow, we first visited this park way back in 2014, when we actually did use a stroller much of the time!
Back then there was a stand-alone twirly slide, a kangaroo and frog spring rider, two big and two baby swings, an old-school metal geodesic climber, and a decent play structure with slides and climbing wall and more.
It was certainly nothing fantastic, there was no safety surfacing, and it was all nearing the end of its lifespan….but… 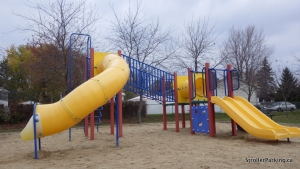 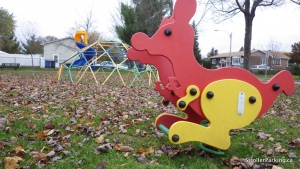 The new-in-2022 revamp is both great, and (according to nearby families) quite the failure. Whoever chose the play structures seems to have disregarded who actually plays at this tiny neighbourhood park. Which is most probably toddlers and young children.

Now don’t get me wrong, I do LOVE the aqua-coloured rope climber that’s the star of the playground. By Elephant Play, it has ropes and rungs to cross and will be great for older kids. It’s unique and has a lot of play value for kids around 8+.
But, for younger kids there’s literally nothing else in the park other than the one baby swing.

So ya, rope climber, one adult swing, and one baby swing. That’s it. No slides, no ground-level play things for the littlest kids. Too bad. There is also a huge amount of stylized concrete that must be space for benches and/or picnic tables still to come. I think. Otherwise, it’s just a whole lot of concrete.

Things to note:
-There is shade around the perimeter of the park.
-There’s no fencing.
-Everything is on sand.

Fourth time’s a charm! I feel like we’ve been trying to visit this park for years. And actually, we have. Every time we’d previously…