If you’re a fan of poutine, then you’ve probably had St-Albert cheese at some point. They make those perfect, squeaky cheese curds that melt juuuust that right amount and make for a heavenly experience. (What? I like cheese!)

In one of our weirder excursions, we visited the St-Albert Cheese Co-op, which was founded in 1894, and watched cheese being produced and packaged.
And the kiddos were ENTHRALLED.
I was too, as were their grandparents. Who knew production lines could be so exciting?
(Actually, I guess the people behind the show “How It’s Made” had an inkling people like watching these things…)

Now I probably wouldn’t do a special trip out to here, but my parents live nearby so it was an easy outing for us followed by lunch. If you’re travelling between Montreal and Ottawa, it’s about 8 minutes off of Highway 417 at Exit 66 (Casselman/St-Albert) and makes a cool detour.

We arrived around 11 (the hours are HERE), patted the fibreglass cow outside, told the kids that “NO”, they couldn’t ride it; and then wandered around the large and impressive food boutique filled with local products, gourmet items, and of course, cheese. Loads and loads of cheese in every sort of form.
We wouldn’t have known about the viewing windows if I hadn’t read about it previously on their website. There wasn’t a sign (unless I’m really, really blind), so thinking “this must be the way” we headed up the stairs (there’s also an elevator), found the 200-foot long corridor, and watched them wrap cheese for about 20 minutes. I kid you not, the boys were SO excited and didn’t say a word except to exclaim in distress when a cheese missed its wrapper or went off course on the conveyor belt.
The drama!

We watched a short video about the 2013 fire which destroyed the former building, and then went back downstairs for our lunch.
And it was oh. so. good.
Poutine, hamburgers, fresh tomato soup, and a pulled pork sandwich were our group’s choices; and there are salads, kids’ meals, all sorts of burgers and grilled cheeses. You can even get poutine made with vegetarian gravy! 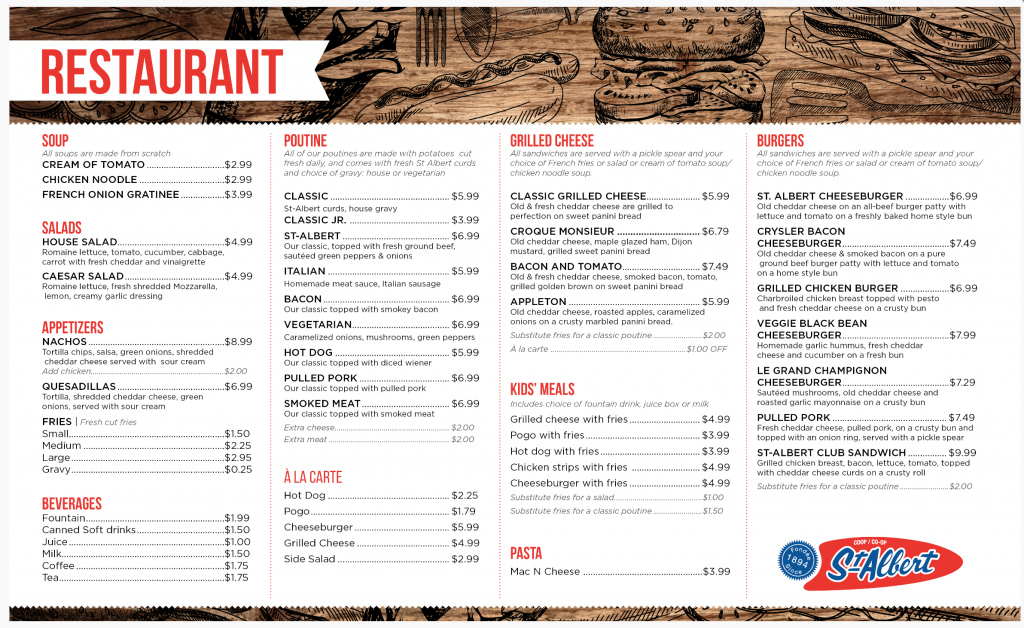 For our group of 5, it cost us under $40 including drinks and taxes. That’s pretty good!
Regretfully, we didn’t have room for dessert but there’s an impressive array of gelato, sorbet and ice cream for sale.

A good time to visit would be between August 17th-21st, 2016 when St-Albert hosts Le Festivale de la Curd. You can find all the details HERE.

This is one HECK of an impressive neighbourhood park.  It’s got two fantastic play structures; one that’s two levels! Grass to run around on….