Another park that made us go “huh.”

It’s was great and not great. Cool, yet weirdly not cool. It was the best of times, it was the worst of times…
So ya, we didn’t know what to think!

Backtrack to last year when my husband and I were traveling along the Turcot Yards and I pointed and went “OH MY GOD, what is THAT?!?”, and then got a stern talking to about not causing accidents because I saw a new park in the distance.
I’d been itching to go and we finally braved the hell that is traffic lately through Ville Saint-Pierre, and got to this little park that seems to be teetering on the edge of the hill, overlooking the rail yards and the highway beyond. 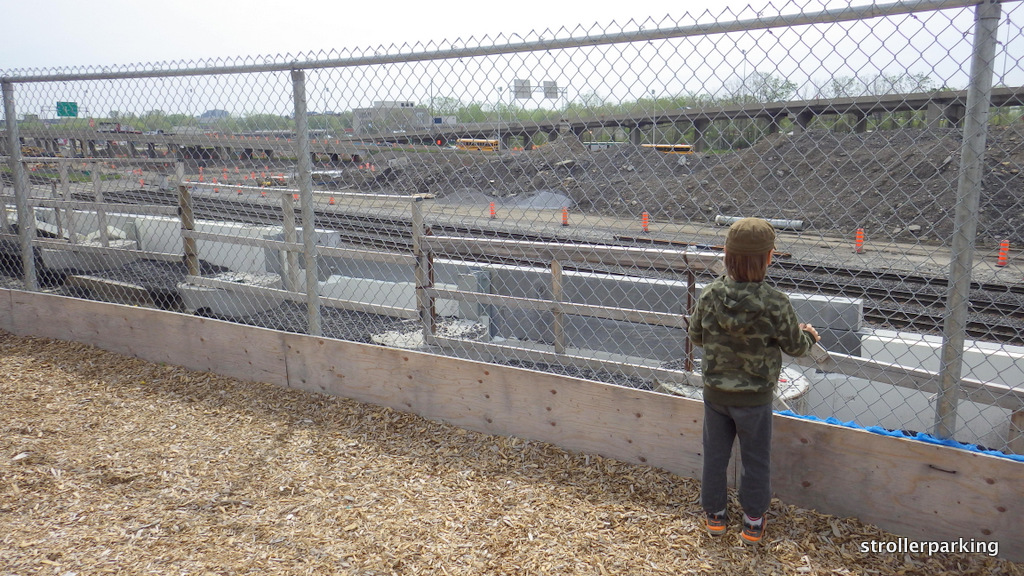 So it’s like…an odd/weird location because it’s essentially beside a highway and you can actually smell the creosote from the railway ties; and it’s a good/weird location because it’s like this giant private window seat to watch trucks and cars and trains going by. There are a couple of daycare centres right in front, so they now have an actual park at which to play, because the next closest one is Davies Park.

The playground has some really funky new products from Jambette including two play structures, and spring riders for four kids at a time. There are also four baby and six adult swings.
The bright purple and green toddler climber is easy to access, has cute little steps and slide,s and for extra fun there’s a rain stick that you can turn and listen to, and a xylophone (though kids have stuffed wood chips beside the chimes so they’re not working already 🙁 )
The bigger climber is challenging, with lots of ways to climb and swing, and binoculars at the top of the slide. My little guy couldn’t find a safe way up, but was content to sit in the little rubber hammock and pretend to snooze.

Some important things to note:
-the whole park is on wood chips
-the playground is completely fenced AND gated
-there’s an additional fenced and gated area on grass that has two picnic tables and a water fountain (and possibly some early morning shade from the one tree)
-BRING YOUR SUNSCREEN! There is absolutely not a speck of shade over the entire playground. It’s going to be hot and smelly in the summer. I feel badly for those daycare kids, because it’s going to be unusable for a lot of summer days.
-parking is available on the street but watch the signs
UPDATED: The city has added a small shade structure, though the playground is still in full sun.

As part of a $3.8 park renovation project throughout some Châteauguay’s parks,  the city has completely updated and revitalized Vincent Park.  We visited just…