Inaugurated on November 28, 2020, the park is a bright and colourful addition to the neighbourhood and a fun destination for a half-day of exploring and playing. Located in a newer housing development, the park offers plenty of active play opportunities for children, places to picnic, and exercise equipment for teens and adults.

If you’re heading down this way during the summer, check out the nearby farmers’ markets and stop in for some fresh strawberries or sweet corn!

If you have kids of varying ages you’ll be relieved to see that all of the play modules are in the same central space so you don’t have to trot from one side of the park to the other to keep an eye on everyone. Kids aged 18 months to 5 can access a double slide by crawling up the Sensory Wave (love this thing) with its built-in activity panels that invite touching and turning. There are also wide stairs and ground-level play things both on this structure and throughout the rest of the play space.

Older kids can test out their balance and climbing skills with plenty of rungs and ladders to cross, sky wheels, and high slides to zip down. This whole play area is on poured-in-place rubber surfacing making it accessible for those with mobility devices,, though there isn’t a TON that’s accessible.

The park also features a section of swings (on wood chips) with baby swings, adult swings, and two tandem swings for face-to-face interaction and multigenerational play. Though all of the swings are great, one that’s accessible with a harness would have been a great addition to the space. 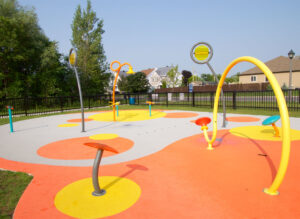 Once hot from all that playing, a refreshing dance through the splash pad will cool everyone down. With in-ground sprays, tipping buckets, spinning tops, and water cannons, this installation will keep young and old entertained and engaged.

The star for us at this park — and most parks — is the zipline. The boys raced each other with one on the seat and one running beside, tried sitting and standing, and then us parents took some turns. I especially like that this model has stairs to get up to the platform as we usually find the ramps too steep or slippery and I always end up having to give them a shove. 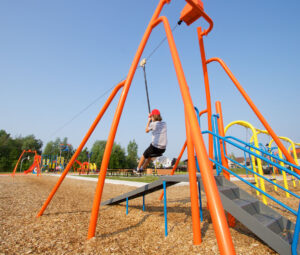 PLAY FOR TEENS AND ADULTS

Don’t count this out as a park just for kids, because the city has also installed a basketball half-court and outdoor fitness equipment that has room for 10 people at the same time. Read through the instructional sign to find training options for beginner, intermediate, and advanced users.

The park is so new that it doesn’t yet appear on Google Maps or street view, but I assure you it’s there!

A great hill in Lachine between Rue Provost to the north and Rue Saint-Antoine to the south (and just off 32nd Ave).  The hill…