We first visited this park in September of 2014, and came by four years later to redo the pictures. Much is the same, though there’s a new and colourful climber (which I think was imported from parc du Chablis when that one was completely redone.) 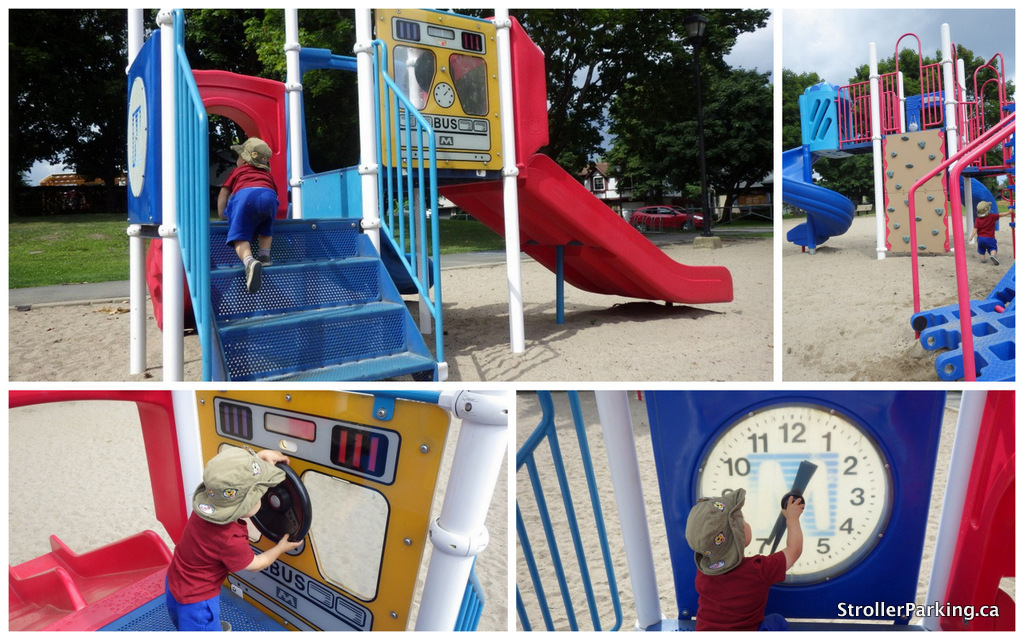 The smaller play structure here has easy to climb stairs and a giant clock with hands to turn (of course in keeping with Kirkland’s tradition of “slightly broken”, it’s slightly broken). There is also a bus panel that they can peek through, double slides and one of those “is it a slide or a bumpy thing to climb up?” doodad.

The big-kid climber was fairly impossible for the little guy but adventurous kids should like it. It has a high vertical climbing wall, the Waffle Wall Climber, the Try Ring Climber (like monkey bars), the Honeycomb Climber, and the super cute Big Timber Hollow Log Slide with its critters peering out from the underside.
The colourful climber which was recently installed has ropes to climb as well as big…uh…balls to sit on. Word of warning, these get very hot in the sun.
There are also four baby and four big swings in the surrounding wood chips.

It was a nice little neighbourhood park and I really liked that both play structures are right beside each other, important if you’re watching different age groups.

Things to note:
-It’s mostly fenced but with open gates.
-We were there mid morning and there was some great shade, but it might be full sun around noon. There are however lots of mature trees and grassy areas to sit.

This is a cute little neighbourhood park with climbers for littles and bigger kids, big and baby swings, a seesaw and spring rider. Older…