Ooooooooo, I wasn’t quite ready for the amazingness when I drove up.
Perhaps I said something along the lines of “OH FORKING SHIRTBALLS!” Which is fine, because:
-The kids weren’t with me on the first trip (I wanted kid-less photos and I thought early morning might be my only chance, we went back again later),
-and I swear both when I’m driving along The Hellscape of The Metropolitan, AND when I’m excited!
This was not on the expressway.

Kirkland Park used to be the pits (see evidence below, and look how CUTE HE WAS!), but the playground has been completely redone with all new equipment and JUST opened up the day before I came. (Thanks Mike!) 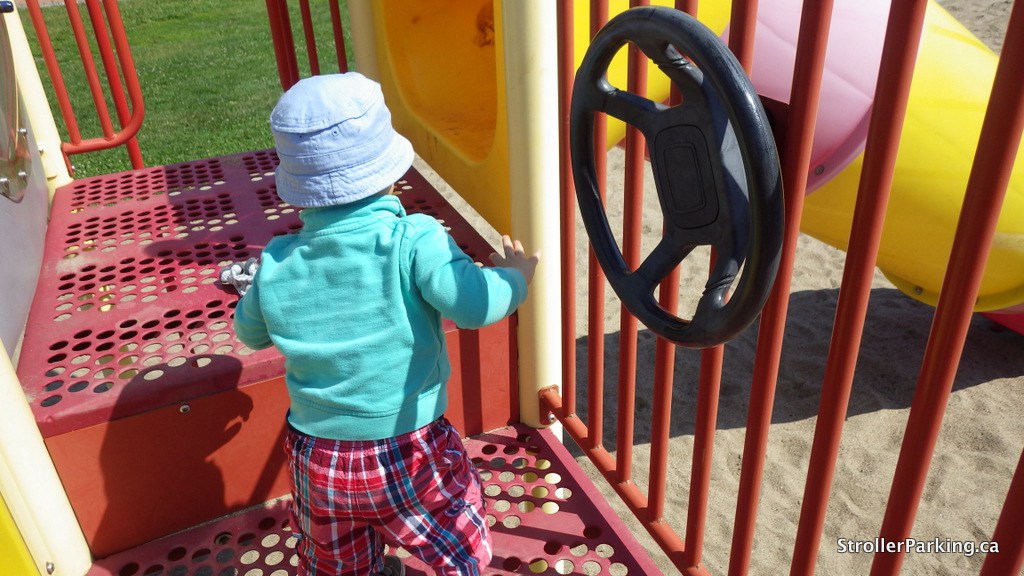 There is a huge shiny red and yellow Miracle Recreation play structure, that I’m sure will garner this park the new name of “The Firetruck Park”, OR, maybe you’ll start calling it “The Zipline Park” because of the NEW ZIPLINE!
What?

That’s right. This is the island of Montreal’s third zipline, and the second one in the West Island (the other is at Windsor Park in Dorval.)
If your kids are like mine, they will travel down it roughly 32,834 times.
“Just once more? Plllll-ease???”

I really like the play structure that’s here because it’s all one big piece that’s great for different ages and abilities. There are challenging ladders, rungs, and tall slides for older kids, while younger ones can use the (steep) stairs to the inside of the truck, slide alongside their parents on the dual slide, or drive at ground-level.

Nearby are two adult swings, the neat Generation tandem swing, a cute car spring rider, and a 4-kid bouncer.

p.s. Thanks to the super nice city employees who were finishing up the stonework where the tables will be, and offered to stop sawing for a bit so I could takes photos without concrete dust in them 🙂

Things to note:
-There’s no shade over the playground, but a shade structure has been added near the sandbox, and the space that will have tables.
-All the equipment is on wood chips, and while there is no fencing, it is bordered on one side by the tennis courts.
-You’ll find really lovely tennis courts and a basketball court here. Also, two baseball/softball fields.

This is a small park with a fully-fenced playground, and a super shady wooded area nearby. You’ll find a play structure, two adult, one…