We originally visited this park in 2015 with my my then 2.5-year old. Back then quite a bit of equipment was broken and old, and not super toddler-friendly. 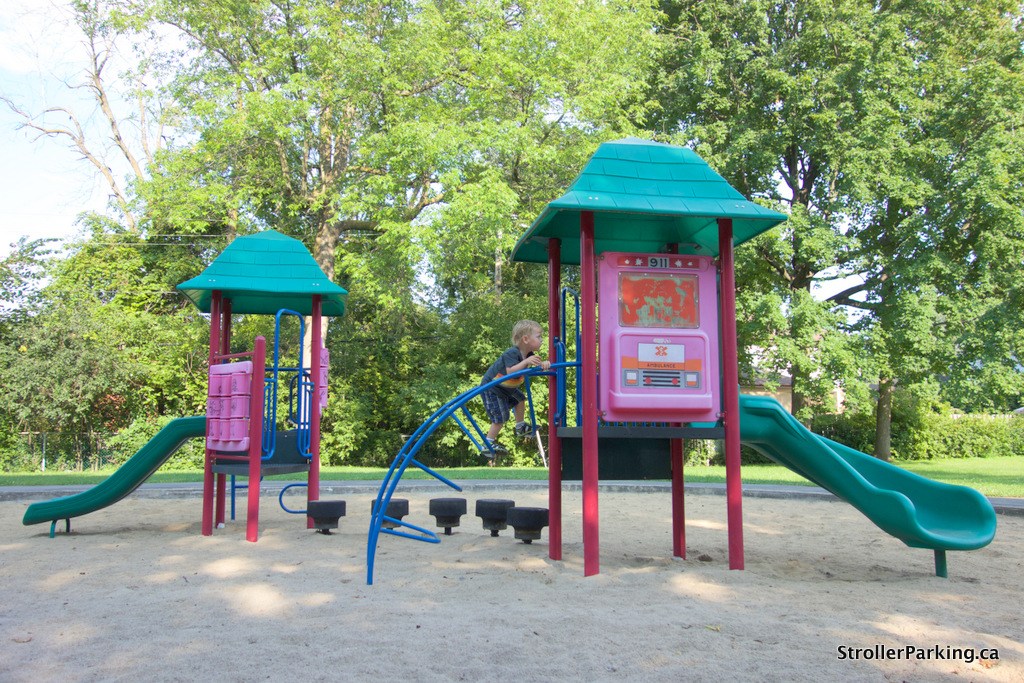 I came back in 2018 to update the pictures and found that the old metal spring riders had been replaced with three cute new ones (a dino, a bulldozer, and a pig), the main play area is now all on wood chips, and a separate sand area with a sand shovel was added nearby.

The two older play structures are still intact, but they weren’t so great in 2015 and haven’t been improved upon since then. There are some sharp bits where the protective plastic has come off and it’s all rather faded and dated. My toddler was able to get up the metal ladder and the across and up the stepping stones, smaller guys aren’t going to be able to do much on the smaller climber. There’s also the ambulance panel and steering wheel with the paint covered window, and some terribly illustrated tic-tac-toe activity walls. These are perhaps the most laughable/bizarre caricatures I’ve seen in a kids’ playground. I think it was a Will Ferrell policeman and a Lionel Richie doctor!

There are also two adult and two baby swings, and you’ll find a picnic table and some benches. While it is fenced, there are no gates. We parked on Rue de Saint Tropez as there’s no parking on Chemin Ste Marie.

Bonus is there’s a dep around the corner!

We were on a search for a Hudson playground, but their website wasn’t working on mobile, and then we found this park, which surprise,…