We visited this park in September of last year, weren’t a big fan it and it was one of the crabbiest posts I’ve written.
Here’s the old park below. It was meant to be a wheelchair accessible structure but was ancient, broken, and badly designed. 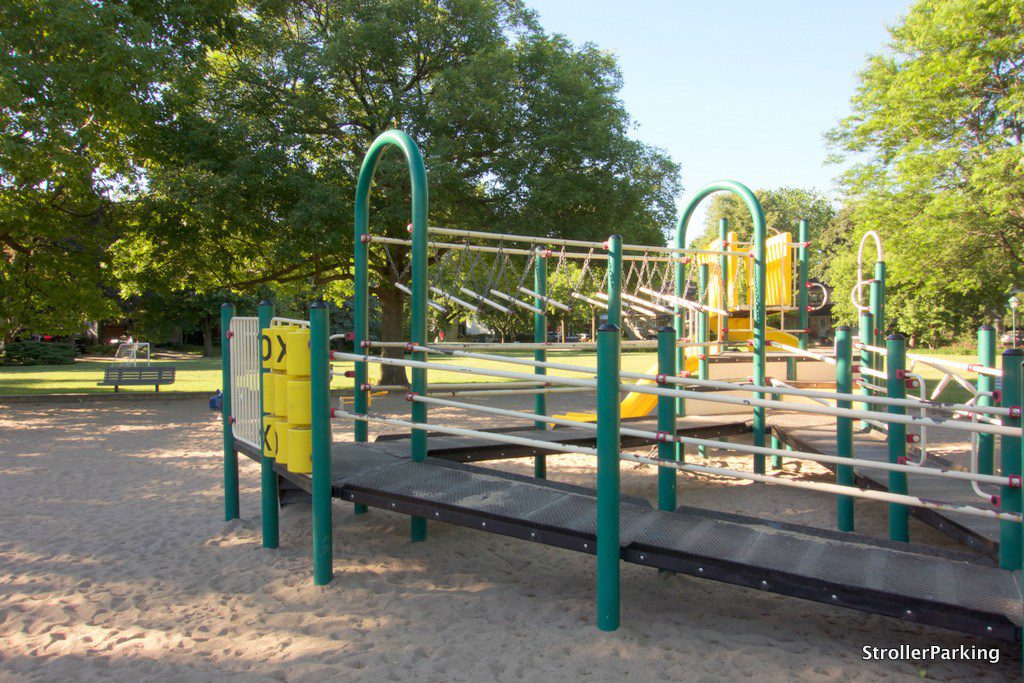 Fast forward to the summer of 2017 and the entire playground has been gutted and replaced with shiny Little Tikes Commercial products including new swings, an adaptive swing, the very cool Revolution spinner, and some great play structures.

The two (or is it really three?) play structures are right beside each other, making it easy to bring kids of varying ages.
The big-kid section has ropes and rings to climb over and through, monkey bars and a sky wheel, an infinity climber, and to get up to the tall slide kids can clamour up the tree trunk ladder.
The structure for kids 18 months-5 years has a couple of metal ladders as well as the Log Slice Climber and the Rocky Rambler, which is sort of like a rock staircase. The slide here is a bit high, especially for an 18 month old, so they may need a helping hand.

We really, really liked the equipment, BUT, everything is on sand. Which makes the adaptive swing and the inclusive Revolution Spinner next to impossible for kids in wheelchairs or with mobility issues to actually GET TO. It’s great having these products, but they’re not actually accessible for the kids who need them the most. So while I marked it as having an adaptive swing, I did not mark it as “wheelchair accessible”.
Its too bad none of the spring riders or the sand shovel from the old park were kept, just for some activities for the really little kids.

Things to note:
-We were at the park super early and there was great shade over both the playground and some of the surrounding green space and soccer fields.
-There is no fencing at all, but the playground is near the centre of the park.
-I took a picture of the garden edging because it was so impressively sharp!
-The park is named for the first mayor of the Town of Mount Royal, you can read about him HERE.

After a date with my 8-year old at the surprisingly cool Maison Nivard-De Saint-Dizier museum and archaeology site, we zipped up the street for…