A poem (or is it a haiku?):
summer sun
so hot on head and bum
why no shade Kirkland?

We first visited this park back in 2014, one of the first that we ever did. Ack, look how small he was!
We’ve since come back a few times and I’ve sort of half redone pictures, but this last time I just redid everything. Updated post and all new pictures in the gallery below. 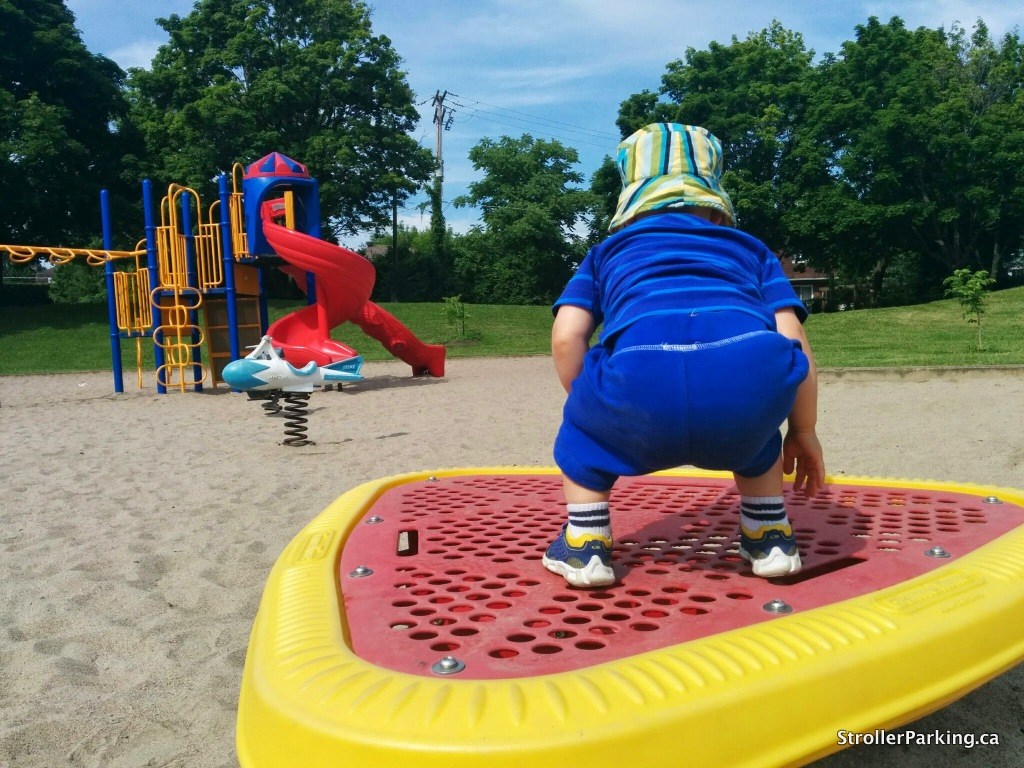 We visited this park at 10am on a very sunny day and sweltered. There’s a newly planted 3 foot tree that should provide some shade in roughly 30 years. Until then, slather on the sunscreen because it’s a pretty good park!
There is a mixture of new and older equipment and I like that it’s all in the same area so if you’ve got kids of different ages (like me!) you can park yourself on the ground or the nearby picnic table and be able to see them all.
There are big and baby swings; three new-in-2018 spring riders (a train, rhino, and boat); the ever popular big plastic “chubby flyer” plane; the amazing Expression Parent-Baby swing, and a wide balance board from GameTime.

The big-kid climber by Miracle Recreation has some nice details like the “lanterns”, treasure map and the critters under the slide. There are a number of things to climb and swing from and it has a challenging rock-climbing wall and twirly slide.

The easy to access toddler climber (that needs to be replaced) has stairs, the Cozy Climber and…sigh…another activity panel requiring repair. Still working, but barely, and really hard for the little one to operate. The activity panels are the Hourglass and Gears and could be fun. There’s also some colourful graffiti on the walls, but unless your toddler is wayyyyy advanced (“Little Timmy is already reading at a college level and he’s only 14 months!”) they shouldn’t be able to make it out 😉
We would have stayed longer, but unless we wanted to sit under the trees on the outskirts of the play area, there was no respite from the sun.

Things to note:
-There’s no fencing around the actual playground but there are hills around some of it and fencing by the road. The hills could be good as it slows them down, but then you can also lose them on the other side…..so…..your call. And while there is no shade over the play area, there are some nice mature trees nearby.
-The rest of the park has tennis courts and a basketball court. There is also a small wooded area.

A very, very early morning appointment brought us to Rosemont, and since the drive from the West Island had only taken us 30 minutes…