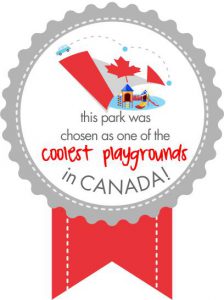 About two years ago, my dad, knowing about our love of parks, told us about this cool show he’d watched on TVO. We found it online and both kids LOVED it. The first 3 seasons followed six kids per episode as they helped design and build over thirty playgrounds around Ontario. But for season 4, which filmed during the summer of 2016, the show went BIG. How big?
Well, to celebrate Canada’s 150th birthday in 2017, Giver set out to build Canada’s LARGEST playground.
Last year, when we happened upon the casting call looking for kids across the country to join the show, we got right to work making an audition video (omg, so cute), and my 8-year old drew his “ideal” park (complete with accessible features of course!)

We crossed our fingers and waited….and then got the call! My little big-guy was chosen as one of the six to appear in the Québec episode along with Giver’s amazing hosts Michael Lagimodiere and Dominique Boisvenue. We filmed at Mooney’s Bay in Ottawa for three days last summer over an amazingly hot week of 30+ degree weather. All the kids were troopers in their jeans, work boots, undershirts, Giver shirts, and giant microphone belts (hot, hot, hot!); and got to do some awesome things like drive a steamroller, a bobcat, use power tools, go on a canoe ride, learn about fur trading, and get sprayed by firemen. 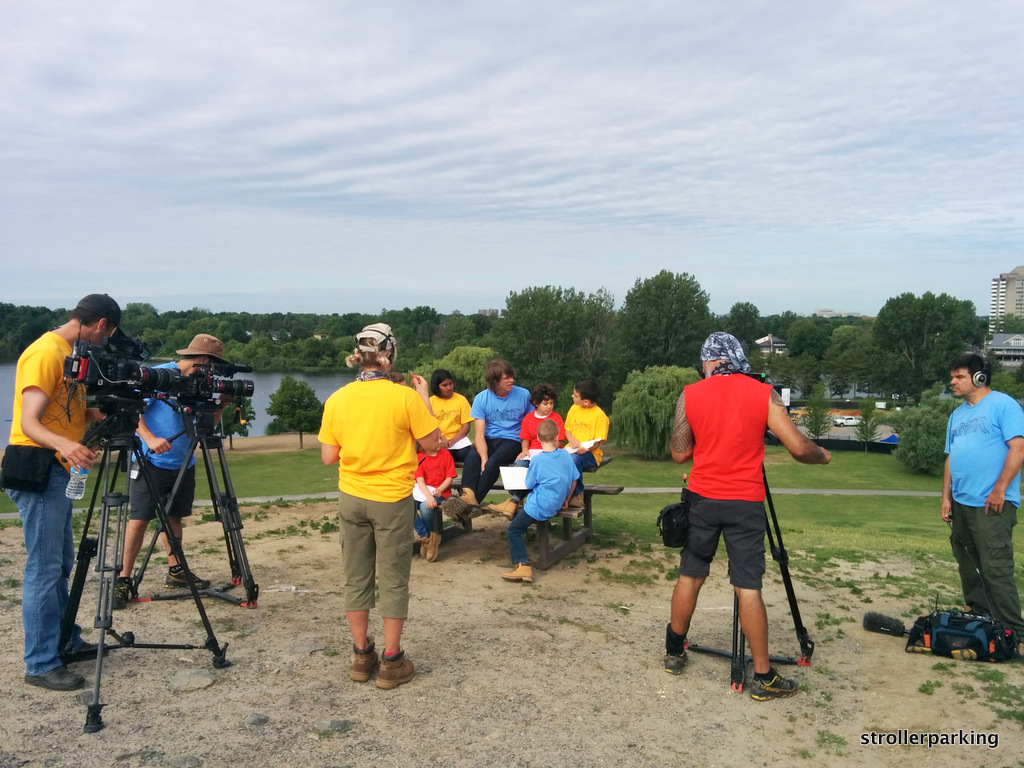 I got to wear steel-toed boots and shovel a LOT of wood chips.

The immense 4,600 square metre playground in the shape of Canada (check out that drone footage in the trailer!) showcases all 10 provinces and 3 territories, and includes hand painted murals, art pieces made by the kids, and hidden plaques with Canadian facts.  You can ride a wheelchair-accessible Viking boat in Newfoundland and Labrador, peer through the window of the fur trading log cabin in Quebec, play with toys in the raised sand table, sit in a wrecking ball swing in Ontario, and clamour up an igloo-inspired rope structure. The playground has something for all ages.
Still to come is some landscaping and hopefully benches and/or tables will be installed in and around the play areas.

Come for the day and you can hang out at the playground and then relax on Mooney’s Bay beach, have a snack at the tiki-styled Baja Burger Shack (great poutine) or bring your own food for the public bbq pits, watch the rowers from nearby Carleton University, and go across the road to Hog’s Back Park to see the falls.

Couple of things to note:
-It is paid parking between 7am and 6pm. It’s a bit of a hike from the parking lot on Riverside Drive, but you can also park at the paid lot right off Hog’s Back Road near the “Pirate Adventures” boat launch.
-The address for Mooney’s Bay Park is 2960 Riverside Drive, but the playground is closer to Hog’s Back Road and the river. But anyhoo, it’s large, I’m sure you’ll find it!

The 10-episode series starts Wednesday April 26th and showcases the power of kids (!) as they design and help build Canada’s LARGEST playground.

A HUGE THANKS to Giver, TVOKids, and Sinking Ship Entertainment for the opportunity, the life skills, the laughter and fun, the giant vats of coffee, and for giving kids the chance to make a difference! It was a great opportunity and something we talk about all the time.

Watch Giver 150 on TVO (in Ontario) and tvokids.com Wednesday April 26th at 6pm, OR on TVOkids.com following broadcast and TVO Kids Youtube page.

Behind the scenes photos from our 3-day television shoot

Return to all albums
,

Completely redone, this small park has a weird and cute play area, lovely landscaping, and the coolest drinking fountain! (The things I get excited…