We originally visited this park back in 2014, when both kidlets were so itty-bitty small, would literally stop to smell the flowers, and were much less snarky. 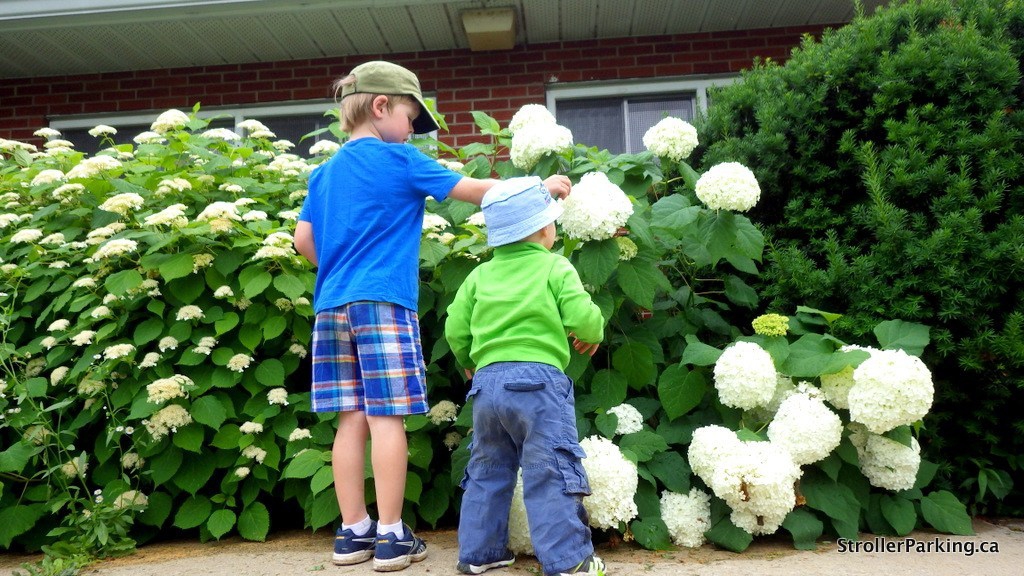 They’d both agreed that the playground was fun and no one had minded that the swing seats were a little soggy after a night of rain.

We’ve come back a few times since 2014, but you’ll ALL want to come now that DDO has built one of the best splash pads we’ve seen.
When I went by to check on its progress, I was DELIGHTED to see that it was open, on, and I was able to take pictures and video 🙂
Opened right at the beginning of July 2019, this large splash pad on a colourful and fun poured-in-place rubber base has different sections for various ages, lounge chairs and benches, picnic tables, and a shade structure over more tables.

The highlight at this jungle/animal themed splash pad is the huge Supersplash dumping bucket o’ water which will absolutely drench you with its cascading waves. There are also water cannons, ground jets and sprays, a tall giraffe and dripping leaves, and the slightest stream through the middle as the water heads to the drain. Perfect for stomping in.
In the toddler area is the adorable Hop textured stones which you can jump on, or tentatively poke to watch the sprays bubble or shoot up. So cute! There’s also a gentle butterfly, a cute frog, and the spinning Helio ball which – yup – soaked me.

It is just fantastic and should entertain kids of all ages. And their parents.
Kudos to the company who came up with this layout and design, I’ve heard rave reviews from parents and kids already! Just beautiful.

The playground is on the other side of the park, close to Lake Road, and not really in eyesight of the water area. So…pack up your belongings and head over here once they’re done splashing. Or play here before, and then cool them off afterwards!
In the sand is a new firetruck spring rider, some old-school teeter-totter things, and a couple of play structures.
The big-kid climber has no stairs but instead has various metal ladders.
There is also a toddler climber with stairs, slides, metal ladder, and a ground-level window. Between the two older climbers is a fairly new Wings of Infinity structure by Little Tikes. Big kids can go from one end to another by climbing and swinging.
The great thing here is that all the equipment is contained in one area, so even if you have multiple children of different ages and abilities, you’ll be able to keep an eye on them all.
There are also a million swings. Ok, four big adult and four baby, but it looks like a lot when they’re all in a row.

THINGS TO NOTE:
-DDO’s other splash pad at Sunnybrooke Park is open from 9am-9pm, though this one seems to be shutting off at 8pm. I think it just needs adjusting.
-No fencing around the actual playground, but there is some down by the street.
-As we left we saw what looked like the teeniest tiniest dog run ever. If someone knows what it is let me know!
-The bathrooms are right beside the splash pad and the parking lot, and there’s an exterior water fountain.

How to describe this park…hmmm If you took the story of Little Red Riding Hood, a bunch of other fairy tales, the game Candyland,…