This park underwent some major renos in 2016-2017 including the addition of pickleball courts, new paths and furnishings, and….a brand new splash pad!
The large splash pad on a concrete base has a ton of colourful products from Aquajeux, including softly dumping buckets, foot-powered flowers sprayers and water cannons (press the yellow buttons with your feet!), ground jets and rings to run through, and a small section closer to the picnic tables that toddlers should enjoy. There are also lovely red lounge chairs, a whack of picnic tables (soon to have a shade structure over them) and a bathroom! Note that we’ve seen this particular bathroom at the two other splash pads in Pierrefonds (Ceres and du Boisé) but have never actually seen it unlocked. You can see the water in action in the video below, and more photos in the picture gallery at the bottom. 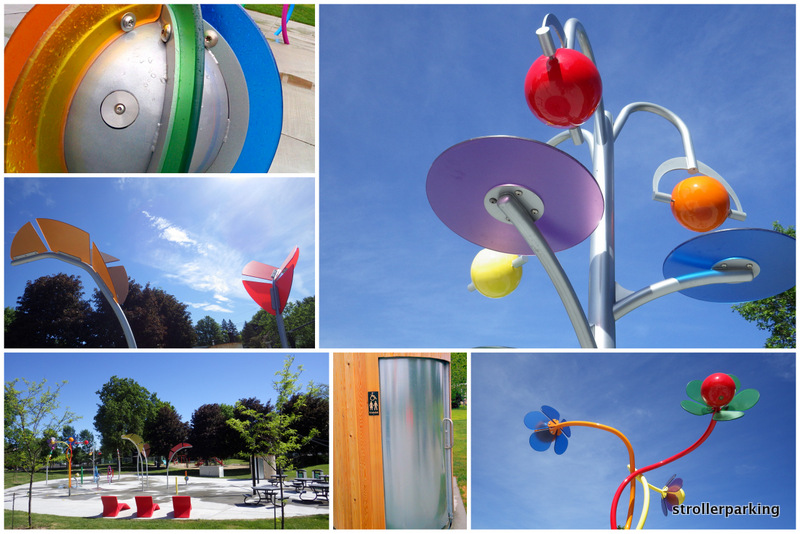 The nearby playground is all on sand, with some benches scattered around the middle part, and while there is some shade under a few large trees, there isn’t much over the actual play area.

The beautiful, dragonfly-inspired big-kid climber from GameTime is tall and impressive. There are monkey bars, a stand-up spinner, metal rungs, and cute “leaves” to get up to the slide platforms. There are three side by side slides, and one really high slide.
It is completely toddler UN-friendly, but great for bigger kids. The last time we were here the toddler didn’t even try getting up, and this time he looked, and went “nope!” before running off to something else.

There is also a giant rope basket spinner that my two kids, and two OTHER kids begged me to spin. So they held on while I tried running in the sand, and when I apparently wasn’t doing a good enough job, the six-year old girl we befriended helped me out. Thanks!
(Note that the spinner is in need of some repairs and the duct tape holding some joints together is broken.)

Just across the path is the toddler area. Another nice, shiny climber, this one from Quebec-based Jambette with a little puppet theatre underneath, a mini climbing wall, slides, steering wheel and binoculars. But no stairs. My littlest could get up the ladder, but he would not have been able to at 18 months. A bit disappointing if you have really little ones.
There are three spring riders from Landscape Structures (stylized turtle, horse, and a…something), a PlayTown Flower Climber, and four baby swings (which interestingly, face in opposite directions).
AND, a super fun ground-level music station similar to the one at Paquin Park.

Things to note:
-With the addition of the splash pad, parking here is going to be a nightmare. You cannot park at all along Pierrefonds Blvd, therefore the closest spot to leave the car is on the street on Rue du Buisson (just off Rue Parkinson). Then follow the little path to the playground.
-There is a large field south-west of the playground, and while the park has some fencing, it is NOT gated near the very busy Pierrefonds Blvd.
-I was told by Pierrefonds that the water is on from 8am-10pm.
-The dep that used to be on the corner of des Sources is now gone, soon to be replaced by a pharmacy apparently. You *might* be able to park there once it’s built.
-The bathroom is a great addition, but it all our visits to the three Pierrefonds splash pads that have these installed, we’ve never once seen them unlocked 🙁

Writing about Côte Saint-Luc parks always takes me a long time, because I end up google-ing and wandering around Wikipedia, which isn’t a bad…