Grab the kids, hats, and sunscreen and set the GPS for Candiac because there’s a new park that’s worthy of a mini road trip.

Officially opened in September 2020, youngsters are invited to run, spin, climb, swing, and dance throughout the colourful ocean-themed playground and nearby splash pad. The revamped play space has areas targeted to a variety of ages and abilities, shady spots, and even tables with USB charging sockets if you need to get some work done while the kiddos play.

Included in the design are a giant turtle and whale that kids can climb and befriend,  play structures with stairs, slides, tunnels, and a bridge as well as ladders and rungs to clamour up or across. There’s also one of my favourite products: the Sensory Wave with its integrated activity panels to touch and turn. Look under and around because there are interactive games to play underneath and beside the raised platforms.

Both large play structures are on sand surfacing, as are the two adult swings and the tandem swing where parents, siblings, or caregivers can swing face-to-face with their baby or toddler.

Steps away on poured-in-place rubber surfacing is a super fun Merry-Go-All inclusive spinner with two integrated harnesses. My kids spun themselves using the central disc, tried it sitting and standing, and then spun me until I turned green and begged them to stop. “I’m goingggggg tooooooo puuuuuuke!” Those who love whirling around can also try out the nearby Sensory Seat and there’s a low-to-the-ground beam for testing out your balance.

While the splash pad elements remain the same as before, the area has been refreshed with paint, new landscaping and flowers, and cheery orange lounge chairs perfect for pretending you’re at the beach. 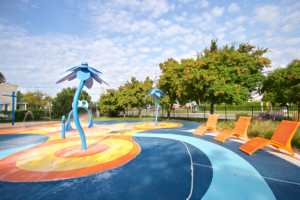 Seeing as how some of the playground is accessible to mobility devices while other sections are not, one thing I would love to have seen done differently is the addition of wood chips as surfacing rather than inaccessible sand. 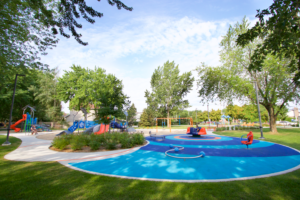 If you’re looking for more places in the area to play, just a few minutes away is the phenomenal Jason Park, and a walk along the Sentier de la Rivière-de-la-Tortue is a great way to de-stress.

After seeing how much both boys LOVED Upper Canada Village this past summer, we wanted to take them to see the more than one…